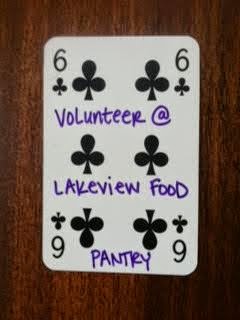 When I first moved to Chicago, I was looking for ways to get involved in my new community.  I was talking to my downstairs neighbor, Kevin, about things to check out and he mentioned that he'd volunteered at Lakeview Pantry in the past.  Lakeview is my neighborhood! His volunteer location was a little less than a mile away at a church called St. Alphonsus which sounded great!  At the beginning of this project I looked up the Pantry and saw that they had a volunteer orientation.  I was a little nervous I'd pull the card Week One, so I signed up right away.  My orientation date was February 2nd.  It was held at the 'East' location... on Broadway in the heart of Boystown.  I walked there after my class got out and managed to get a little lost (I had just talked with the woman who would become my employer and my mind was going a mile a minute)!  Luckily, the folks at the Pantry weren't sticklers for timeliness and let me in.  :)

It was a pretty cool set-up.  I walked into the front room which had a counter and shelves stocked behind it, kind of like what you might see at a grocery store.  They even had a Gluten-free section!  Then I listened to the orientation spiel, met and talked to a few other volunteers sitting around me (apparently this is a popular place for getting court-appointed community service hours taken care of), and finally went on a tour of the rest of the place.  It wasn't a big space - there were some offices, and some shelves jam-packed with food, and several refrigerator/freezer type appliances.  I learned that the Pantry serves people who walk in and utilize the front store-front, but they also have food designated for folks who are homebound and in need of food.  The volunteer opportunities consisted of helping out with front-of-the-house operations, delivery, and unloading trucks.  They can use help most every day of the week, several times a day.  It sounded like something was bound to work with my schedule!

This week I finally pulled the volunteer card and signed up to help unload a truck.  It was at the East location again, which just so happens to also be about a mile walk from my place.  I went directly after my chemistry class and then got down to business.  It was a big truck driven by the Greater Chicago Food Depository.  There were about 8 pallets to unload, filled with things like brown rice, sweet potatoes, milk, eggs, bananas, and canned tuna.  We marked some items with an orange sticker indicating that they were for home delivery... others we just packed onto dollies and wheeled inside.  I'm not one for puzzles, but figuring out how to stock everything was like a giant puzzle I didn't really mind doing :)  I had a good time with the other volunteers - many of whom come every week at the same time to unload trucks and stock the shelves.

It was a beautiful day to be outside working hard and I'm glad I went.  I know I'll be back!
Posted by e at 5:21 PM