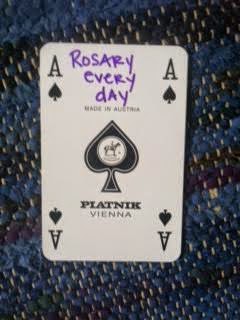 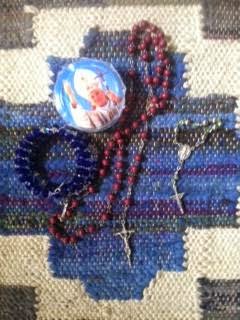 Ah, Lent.  Did you give up anything this year?
I chose to say a prayer for someone new every day.  Much like this card game, I wrote the names of 40 people on little slips of paper and picked one every day as I headed out the door.  I started Lent off sending a little text to the person I was praying for, letting them know they were being prayed for that day.  After many "That's so nice of you" comments, I stopped because I didn't want it to be about me doing something nice - the prayer was really what was important!  This caused my mom, after Easter, to ask if she was one of the people who I prayed for since she never got a text!!  She was the first person I wrote down!!
I digress.  This week I pulled "Rosary Every Day".  How fortuitous.  I picked a name on the way to the train and those lucky people had a Rosary said for them on my hour and a half commute to Hyde Park!  I had many Rosaries to choose from... one of my first was from an old friend who brought one back for me (in a Pope John Paul II case!) after a trip to Rome in high school.  Another was a Rosary bracelet I got for Christmas this year.  The one I used on my train days was a small one I keep in my wallet that I picked up at the beautiful "Basilica of Our Lady of Guadalupe" in Mexico City when I went a few years back.  Anyway, a perfect goal card for Lent!
Posted by e at 12:17 PM