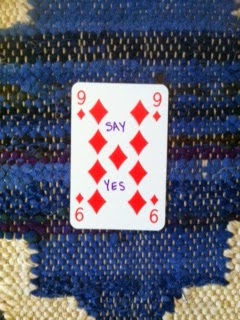 I'm not sure where I saw or heard of it, but somewhere out there this "Say Yes" philosophy is floating around and when I heard it, I thought it would be something interesting to try.

On Sunday, the Nine of Diamonds was pulled and I began my week eager to see what occasions I would have to say yes to. 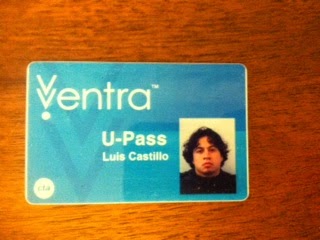 Things started off slowly... I said yes to accepting a jar of pickled beets from my neighbor, for example.  One day, I lost my Ventra card and said yes to my lab partner when he offered me his for the commute home and back to school the next day.  Accepting help isn't always easy for me and typically I would have just politely declined and gone and purchased another one.  (By the way, the Ventra system is awesome... because I had registered my card, when I called them they were able to immediately cancel it and transfer my balance to a new card which was then mailed out to me!)  My lab partner looks super sketchy on his card - he told me not to be afraid of his photo - but he is not scary at all and is obviously very nice!

Then on Thursday I had a pretty significant 'say yes' opportunity.  I was contacted by a family for a home health care position.  They live 'way out' in Hyde Park which is about an hour and 30 minute commute for me... each way... Normally I would have passed given the long commute, but since I was saying yes I agreed to an interview.

This wasn't just any interview.  The family contacted me Thursday evening around 5p.m.  I had just gotten out of my Anatomy and Physiology course and was on my way to a volunteer orientation at Lakeview Pantry.  The woman told me she had my address from my resume and wanted to come over (to my house!!) to meet - that evening!  I wasn't going to cancel my Lakeview Pantry orientation so I told her I had a volunteer commitment that evening.  She asked how late it went and when I told her she said she'd just come over then.  ACK!  I'm not a dirty person or a slob by any stretch... but my apartment definitely needed some straightening up if a potential employer was going to be stopping by to assess me - and my home!  She agreed to meet me the following morning...

... at which point I was hired!  This tardy post is a testament to life with work, school, and a 3 hour commute making things busy!   I trekked out in the middle of the blizzard we just had to Hyde Park on Sunday and again yesterday, so I guess you could say I've officially started!  So far, the commute has not been ideal for studying (the phrase 'packed in like sardines' comes to mind) but I'm glad to be employed and it's interesting work.